Antoine Proulx is an extensive collection of tables and case pieces where balance is often achieved through asymmetry and cantilevered volumes. It is inspired by a divergent array of subjects ranging from the paintings of Francis Bacon and René Magritte to the ceramics and architectural facades of the Czech Cubists. Antoine Proulx is luxury in its most honest and contemporary form. It is furniture meant to be handed down to future generations.

Antoine Proulx was founded in 1993 by Marc Desplaines who launched the U.S. corporation of renowned Japanese fashion designer Yohji Yamamoto in New York City. The Antoine Proulx collection of handcrafted furniture was designed by Marc out of his frustration at not being able to find what he was looking for in the market. As fate would have it, his brother Richard Desplaines was already established as a master furniture maker with nearly 20 years experience producing one-of-a-kind pieces for designers and architects. The two brothers cemented a design/build relationship which would land their furniture in prestigious magazines such as Interior Design, Progressive Architecture, I.D., and the New York Times.

Marc, who earned his B.A. in Economics and his MBA in Marketing from Clark University, began his career in the fashion industry: first as a department store buyer, then as the head of retail, wholesale, and public relations for Yohji Yamamoto in the United States. Utilizing his visual skills and business acumen acquired from frequent world travel and multicultural relationships developed while with Yamamoto, the Antoine Proulx collection of furniture began to take form in Marc's head. While the collection is decidedly "American," there are references and flavors of bygone eras or far away lands. Even the company name, Antoine Proulx, is derivative of Marc and Richard's grandmother Antoinette Proulx whose father was a builder of fine homes in New England at the turn of the century. The brothers maintain that it is this legacy of fine craftsmanship that they endeavor to continue. 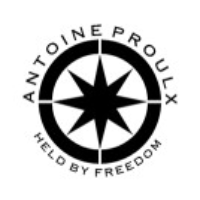